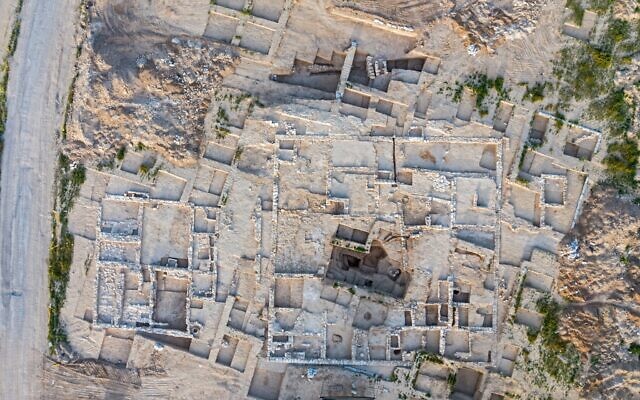 Archaeologists in Israel’s Negev desert have unearthed a 1,200-year-old mosque—one of the oldest ever discovered worldwide. Big enough to hold a few dozen worshippers, the structure is square-shaped, with a small half-circle alcove in the southern wall facing Mecca, per the Agence France-Presse.

Located in what is now the Bedouin city of Rahat, the mosque was discovered during excavations ahead of planned construction, the Times of Israel’s Amanda Borschel-Dan reports.

To determine the mosque’s age, archaeologists turned to the many ceramics also found on the site, which dates to the seventh and eighth centuries.

In 2019, another mosque from around the same era was discovered about a mile away. That mosque, however, held no artefacts. Both mosques may have served the rural farming settlement that existed at the time, writes Haaretz’ Ruth Schuster.

Near the newly-discovered mosque are the ruins of a very different structure: a “strangely magnificent mansion” that may have belonged to wealthy Byzantine Christians, per Haaretz.

At around 10,000 square feet, it had frescoed walls, stone pavement, plaster floors and expensive tableware and glassware.

The structure also had two ovens, one of which was quite large. Because of its size, along with the fact that it was beside a water cistern, excavation director Elena Kogan-Zehavi hypothesizes that the inhabitants were making soap—which perhaps explains their wealth.

“Israel, according to Islamic historians, is one of the areas where soap was made and exported throughout the Islamic world,” she tells Haaretz.

“The actual recipe for the soap would be kept secret and passed down through generations, and made some families very rich.”

While Islam began around 610 in today’s Saudi Arabia, it wasn’t until the ninth century that it became the majority religion in Israel.

Considering this timeline, the rare seventh-century mosques help teach us about Islam’s spread, Kogan-Zehavi tells the Times of Israel.

What they’re learning: “Islam came very, very early in the northern Negev and began to live alongside the Christian settlement,” she says.

Still, many questions remain about the region’s transition. Did Christians in the region become Muslims, or did semi-nomadic tradesman bring Islam from afar? The answer is likely both, says Kogan-Zehavi.

“All the questions are seen in the open there on the site,” she tells the Times of Israel. “It’s now our job to try to piece together the information to understand what happened.”